WE’RE used to seeing Oti Mabuse on the arm of a man as she spins across a dancefloor.

For seven years she was seen on Strictly Come Dancing alongside the likes of Kevin Fletcher and Bill Bailey, then Ashley Banjo on Dancing On Ice.

But for her solo presenting debut, the dancer wanted to mix things up.

Oti said: “Vikki is a powerhouse. I’m so excited to be working with a female musical director on Romeo & Duet — something we don’t see enough of on TV. 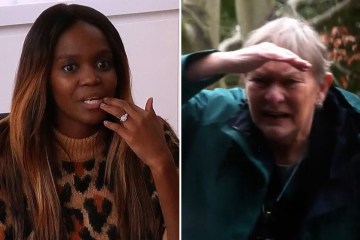 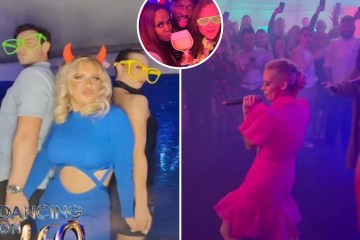 “It’s girl power on that stage, let me tell you.”

Vikki is best known for her impressions of Dragon’s Den star Hilary Devey but will now be catapulted to primetime fame.

A source said: “Oti was always one of Strictly’s most powerful performers but now she is really calling the shots in a much more important way.

“This is a very positive move towards equality on telly.

“Of course, Oti thinks Strictly’s band leader Dave Arch is fab. But Vikki will be a welcome change.”

The band will accompany singletons as they serenade a potential suitor from a balcony, hoping the mystery lover will like what they hear and reveal themselves.

Later the matched-up pairs will perform a duet together.

Oti said: “Music is at the heart of these love matches and Vikki & The Heartbeats provide the best soundtrack for our singing singles.”

It won’t be Vikki’s first time on telly, with a string of bit parts on her CV including BBC1’s The John Bishop Show and Impractical Jokers on BBC Three.

Romeo & Duet starts tomorrow at 7pm on ITV, before Britain’s Got Talent.

So will Oti’s singles have voices to rival the crooners auditioning for Simon Cowell?

She said: “The thing I love about this show is it’s not about singing. It’s about having a good time.”

Following The News Desk, it will feature Piers Morgan Uncensored at 8pm then Sharon Osbourne on The Talk at 9pm.

NOW, I’m no careers adviser but it feels like Freddie Flintoff might end up regretting his decision to leave A League Of Their Own earlier this year.

Financial records newly released show profits fell at the former England Test cricketer’s company – to the extent that Freddie and wife Rachel were forced to give themselves a £282,000 pay cut.

Freddie, who co-hosts Top Gear on BBC1, announced in February he was leaving the Sky comedy sports quiz after more than a decade.

He said on Instagram: “It’s been 12 years, 16 series, six road trips across America and Europe, two Baftas and a mud bath I’d rather forget but the time has come to leave the amazing ALOTO team.”

I’m sure Top Gear will help top up his bank balance.

ADVENTURER Rob Bell is back with a new series of Lighthouses: Building The Impossible for Channel 5.

From the North Atlantic to the North Sea, Rob reveals tales of catastrophic shipwrecks, dramatic rescues and feats of survival.

GRASS IS GREENER WITH C4

YOU can tell spring has sprung from the bloom of gardening shows on telly.

Channel 4 welcomes back Joel Bird and Bruce Kenneth for a new run of The Great Garden Revolution, with new helper Errol Reuben Fernandes, head of horticulture at London’s Horniman Museum.

Producer Fintan Maguire said: “With a makeover at the heart of each show, and handy and practical tips, this series is for both the beginner and the more experienced enthusiast.”

Errol added: “I hope to champion sustainable gardening practices that support wildlife and are environmentally friendly.”

ALEX HORNE has been handed a new comedy show.

And if you don’t think I’ve said “Horne” enough, the man himself would agree.

Alex said: “I’ve always thought the title of a show is indicative of the quality of the writing, so The Horne Section TV Show looks set to be pretty special.”

The band have gigged with artists ranging from Robbie Williams and Madness to Amy Winehouse and dance giants Basemet Jaxx.

Alex added: “I’ve known some of the band for 40 years.

“It’s weird that any of them are going to be in a six-part scripted comedy series.”