The Oregon Division of Motor Automobiles is having a really really hard time figuring out how a great deal to cost motorists for title and registration charges.

An internal audit of a subset of charge transactions introduced before this thirty day period by the Oregon Department of Transportation revealed that the DMV billed men and women the mistaken volume in title charges 17% of the time and levied incorrect car registration costs 26% of the time. The errors integrated both equally overcharging and undercharging car entrepreneurs.

According to the audit, the DMV under gathered about $1.7 million in service fees — and which is just from the transactions auditors reviewed.

Why does ODOT care about this? For the reason that title and registration service fees make up about $437 million of their yearly earnings. And as ODOT seems to be into the long run with big ideas for congestion pricing and tolls, they require to make positive community belief is rock reliable.

Regretably, what they found at DMV is fairly terrible. “Results of the audit observed a high amount of mistake,” ODOT Director Kris Strickler wrote in a letter to the Oregon Transportation Commission ahead of their assembly in Salem on May possibly 12th.

Of the 702,343 transactions analyzed by the audit, 7,151 customers paid much too considerably and 156,972 customers did not pay out more than enough. 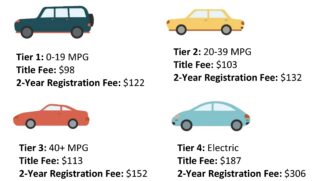 There are quite a few culprits and they all occur again to glitches being designed in mileage per gallon scores — a thing that has develop into much more sophisticated since a tiered payment structure went into area in January 2020 and additional Oregonians are buying hybrid and totally-electric autos.

Title and registration service fees in Oregon are based mostly on a vehicle’s MPG score set by the U.S. Environmental Security Company (electric powered automobiles and vans are a different tier). Oregon went to a tiered rate construction (at right) in purchase to near the hole in gasoline taxes compensated by entrepreneurs of high-mileage vehicles. Since additional fuel-economical cars pay back a lot fewer in fuel taxes (ODOT’s #1 supply of non-federal income) and still use the very same transportation system, ODOT desires to “reduce this inequity in how motorists pay.”

The challenges at DMV arose when motor vehicles ended up positioned in the completely wrong tiers thanks to faulty MPG rankings getting employed. The faults are blamed on a mix of defective products, incorrect MPG information taken from automobile dealerships, and errors manufactured about driver enrollment in the state’s OReGO system (a voluntary automobile miles traveled fee pilot).

For instance, if DMV assigns a 25 mph score to a car or truck that has an EPA score of 40 MPG, they conclude up undercharging the proprietor by $20.

For some cause there was an primarily large amount of mistakes on the base model Toyota Prius the place a the vast majority of house owners — 18,813 out of 32,935 — where by billed fewer than the suitable quantity.

“The implementation of the tiered payment construction has led to several difficulties that ODOT demands to tackle for the tactic to be reasonable to Oregon drivers and to bolster equity in paying out for the transportation process,” the audit reads. “ODOT has not captured the complete probable of increased income by less than charging on a sizeable quantity of transactions.”

Between its recommendations, ODOT claims DMV wants to put into action a high-quality control approach, offer automobile house owners reimbursements, make a conclusion on how to handle persons who underpaid, and so on.

You can down load a copy of the audit here (PDF).

CORRECTION, 4:00 pm on 5/26: I originally claimed that title and registration costs designed up “about $1 billion” in ODOT yearly profits. That is improper. I puzzled biennial price range quantities of with annual collections. I also mentioned the volume was not significantly behind what they convey in with fuel tax revenues. That was also improper. I regret any confusion my problems caused.

Jonathan Maus is BikePortland’s editor, publisher and founder. Speak to him at @jonathan_maus on Twitter, by means of electronic mail at [email protected], or cellphone/text at 503-706-8804. Also, if you read through and respect this site, please turn out to be a supporter.